Walkers’ Abbey is an outpost in Venarik’s Deep, about an hour’s passage below the Granite Tower, operated by a branch of the Order of Saint Venarik. Its current status is uncertain, and information may be out of date.

The Abbey was founded by Saint Venarik herself, but eventually she left to travel further into the deep. The monks devoted themselves to the worship of Torag, contemplating and interpreting Venarik’s teachings, and searching the Deep for traces of their lost founder; this earned them the title of Walkers of the Deep.

The Abbey has three levels. The heavily-fortified lower level guards the passage between the Tower and the further Deeps. The middle level hosts guard and storage areas, and the upper level hosts living quarters, devotional, and training areas. The Abbey also maintains two mushroom fields outside the fortifications, one above and one below.

The lower level is designed so that travellers and traders can pass through, without being allowed access to the rest of the Abbey. Each end of the through-passage is protected by a Pattern 87-D door backed by a portcullis and covered by murder holes, with periscopes and speaking tubes to allow defenders to see and communicate with visitors. The through-passage zig-zags in the middle, and each corner is covered by two ballistae that can fire through narrow ports to cover the corridors. These can only be accessed from the middle floor, unless you’re skinny enough to get through a three-inch port.

Adjoining the corridor is a barracks (connecting to a prison) and a temporary store area. Traders and suppliers leave their shipments in this area, to be transferred further inside the fortress after any visitors are gone. The barracks and the temporary store are each separated from the inner fortress by another 87-D.

In emergency the 87-Ds can be closed in seconds by a quick-release, but it takes a team of ten dwarves almost two hours to completely open them (or about twenty minutes to raise them enough for an unarmoured dwarf to crawl under) – each block weighs about 200 tonnes. This could be inconvenient if a scouting party or mushroom shipment needed to return in a hurry, so normally the 87-Ds covering the through-passage are left open, on the assumption that a portcullis will hold most foes long enough for somebody to throw the quick-release.

However, standing orders require that as long as either of the through-passage 87-Ds is open, the inner two (next to the barracks and the temporary store) must be closed. This means that changing the guard in the barracks or transferring goods from the temporary store requires closing the through-passage. Normally this is done about once per “day” – the guards take food down with them and sleep in shifts. All in all, changing the guard takes about five hours and a lot of elbow grease.

Past the temporary stores is a loading room (used to transfer goods upstairs) and a waste pit. The Abbey’s refuse and rubbish are eagerly devoured by a large and mostly-tame otyugh, who converts them into somewhat less noxious form; every so often, dwarves haul out a barrow-load destined for the mushroom fields. 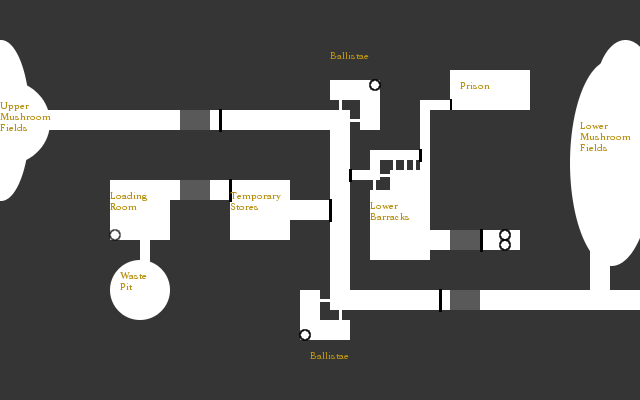 The middle floor is reached either by a ladder behind the barracks, or by stairs from the loading room (or you can sit on a barrel and get winched up there). At the northwest and southeast lie two large gaterooms, which house the winches for the 87-Ds and portcullises as well as the periscopes, speaking tubes, and murder holes; they’re stocked with unpleasant things to pour on unwelcome visitors. Elsewhere on this floor there are several store rooms, a couple of guard rooms, an armoury, a magically-heated forge, and water supplies fed from a natural spring. Several stairs lead to the upper floor; the main store-room occupies two floors and has a ramp up.

The top floor houses a refectory, living quarters for the occupants, baths, laundry, kitchen, an infirmary, a sparring room for combat drill, a library/scriptorium, and a chapel, as well as a few shrines and spare rooms that can be adapted for various purposes. Also the privies, directly above the otyugh’s pit. 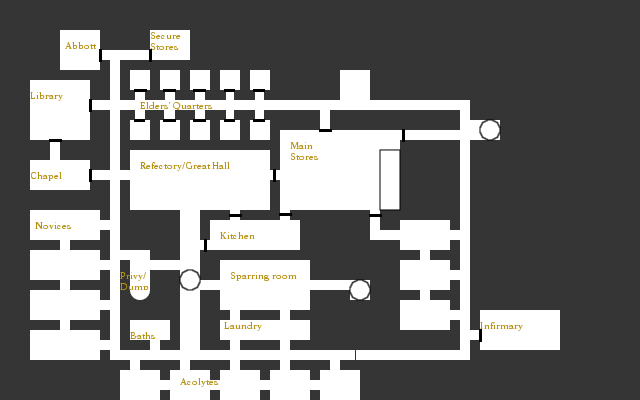 The Abbey was built into a natural cave, but it’s been expanded and reworked so that the shape of the original is hard to make out. The walls are mostly masonry, lined with lead to control damp and interfere with certain magical threats.

The brothers and sisters of the Abbey spend their time between guard duty, mushroom tending, working the winches, training, religious sermons, silent contemplation, miscellaneous chores, and sleeping. The senior members sometimes stage expeditions into the deeper caves, to keep tabs on activities further down and to look for traces of Saint Venarik.

Normally the Abbey receives a steady supply of ale, meat, cheese, and other staples from the surface, but they have enough supplies to last for years (a little flatgoat goes a long way) and can usually rely on at least one of their mushroom fields.

Inhabitants of the Abbey before the Recent Incongeniality:

Approximately 80 novices: dwarves new to the Abbey, although some may have considerable experience above. Novices typically spend about ten years in the Abbey, and may then choose whether to return to the surface (as most do) or to stay and progress as Acolytes. Denarik’s brother Emrath Goblingrinder is a novice of eight years’ standing.

Approximately 60 Acolytes: experienced dwarves who’ve decided to dedicate their lives to Walkers’ Abbey. Acolytes oversee and train the novices under the eye of the Elders, and form the backbone of the Abbey. At any given time, perhaps a dozen Acolytes will be out on long-term “patrol” below the Abbey, keeping tabs on happenings in the Deep and dealing with potential menaces.

About two years ago, an expedition led by Elder Jontar managed to recover an old journal of Venarik’s from duergar, and returned it to the Abbey. It was written in a secret script that took Elder Torva months to decipher; meanwhile Jontar had headed back to the Deep.

According to Torva’s notes, the journal hinted at some disquieting facts about Saint Venarik, apparently implying a crisis of faith. It seems Torva shared this information with Renda and Dern, and the three of them were corrupted to the worship of Zon-Kuthon and staged a coup that left many of the Abbey’s inhabitants dead or worse. The Abbey shut off communication with the surface; eventually a heroic band of adventurers discovered the corruption of the Walkers and assisted the Granite Tower in assaulting the Abbey.

Of the 150-odd dwarves who lived in the Abbey, about thirty were imprisoned and have been rescued. A few of the lower-level traitors have been captured, but so far have revealed little of note. Aside from Gobbleguts, the elders are all dead, with the possible exceptions of Jontar (last heard of about 18 months ago, gone back into the Deeps to look for more traces of Venarik) and Torva (not found when the Abbey was captured, whereabouts unknown).

by: GeoffreyBrent
See All Pages