Venarik’s Deep is a major cave complex in Venstra. The best-known entrance is via the Granite Tower, guarded by the mostly-dwarven Order of Saint Venarik, although at least one other entrance is known to exist (at least, until the dwarves blow it up again).

The caverns of the Deep have formed through a variety of mechanisms. The older caves have been formed by water, or by faulting, or by stranger mechanisms; some of the deeper ones seem to have been melted out of the rock. Newer ones have been dug out by miners, dwarvish and otherwise. The veins near the surface have mostly been played out, but deeper down somebody who knows where to look can still find profitable amounts of silver, mithril, and adamantine. (Smelting can be a problem; fuel is hard to come by down below, and often the denizens just trade ore to the Granite Tower, but some have found their own solutions.)

The Granite Tower dwarves refer to the Deep by sections:

The Shallows are the nearest part of the Deep, roughly between the surface and Walkers’ Abbey. This area is usually relatively safe and well patrolled by dwarves, although it experiences the occasional incursions by goblins and miscellaneous beasties. The road to Walkers’ Abbey is well marked and well worn. At one point it crosses a fault plane in the rock; this fault has been enlarged in places by water action, and now forms a chasm with a pool at the bottom. The continuation of the fault appears to lead to a goblin-infested cavern, but the dwarves have now taken steps to block this up.

The Shallows used to be a major area for mining, but the mines are now pretty much played out.

Until recently, Walkers’ Abbey was a monastery that acted as an advance defense for the Granite Tower against attack from below, a base for patrols of the Near Deeps, and a retreat for contemplative followers of Venarik. Recent unpleasantness left most of the monks dead, but the Abbey has been retaken by the Granite Tower and is now under direct control of Master Lewarik.

The Near Deeps are frontier territory, beyond the Abbey but still within range of its patrols. There are some rich deposits of ore here, making it attractive to miners willing to brave the region’s hazards. The dwarves here have a somewhat lawless reputation; working the Near Deeps is the dwarvish equivalent of “went to the colonies” for those who’ve sullied their reputation at home. There are four main clans tangled together by marriage and an occasional vendetta.

Dwarves of the Near Deeps organise roughly along clan lines; each clan has mining rights in its own territory, with disputes occasionally leading to bloodshed. Some dwarves operate in small groups rather than split their finds with the clans; a prospector with a good eye can make it rich here by finding a pocket of adamantite or gems, but it’s risky work.

Travelling the Middle Deeps is more dangerous than the Near Deeps; the tunnels are less well-engineered, the locals can be unfriendly to strangers, and now and again one of the deeper factions comes up to raid.

If the Near Deeps are the frontier, the Middle Deeps are the wilds – at least, from a dwarvish perspective. Some of the more foolhardy prospectors come here occasionally, as do occasional fugitives, but there are no permanent settlements of surface folk this far down. Watcher’s Abbey sends (or at least, sent) patrols down here now and then to keep an eye on developments of interest, and to search for Venarik.

But the Middle Deeps have plenty of other inhabitants. As well as an exciting variety of oozes, fungi, spiders, centipedes, and other wildlife, there are several more-or-less intelligent races that call this area home. Some of the best known: 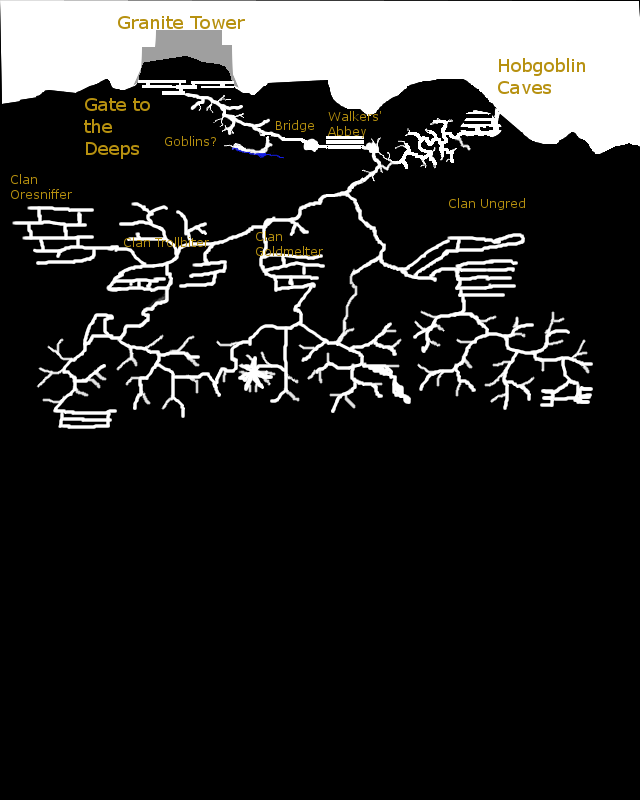 The Middle Deeps are pretty much the limit of dwarvish exploration, but the tunnels go on and down. Whatever lives down there, it’s probably not friendly. There are rumours of a great sunless sea populated by eyeless fish as big as whales, of ancient cities that rival the Granite Tower in size, of a hollow world with a sun in the middle, and various other improbable things. Presumably most of it’s made up.

by: GeoffreyBrent
See All Pages