Mel is a half-elf fighter. Young (recently exited-rather-than-graduated from Northport’s Khan Academy of Magicks), tall, only displays any elegance when she fights. She carries a bastard sword, two daggers and a spiked gauntlet, because that’s just what she picked up in the pits.

Mel (Melisande – call her that at your peril) is the half-elf child of two half-elves. Both gentle, scholarly, graceful magic users, her parents were entirely confused by their large, awkward, blundering younger daughter. Convinced that she was a late bloomer who would blossom when surrounded by like-minded students, they sent her to Northport’s magic school. 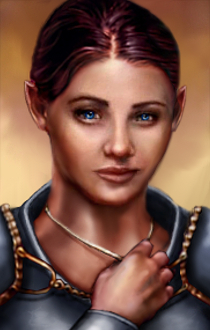